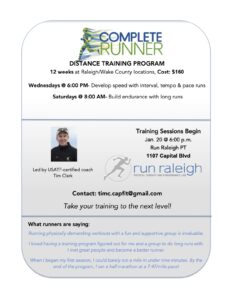 Strength classes every Monday at 6:00 pm to supplement your running!

ABOUT THE HEAD COACH
Tim Clark, AICP
Tim Clark is from Kent, Ohio but moved to Raleigh with his wife and two young daughters in 1986. Tim has worked in urban planning in Iowa, Pennsylvania, and North Carolina. Tim’s love for distance running began in 1971 at Kent Roosevelt high school, where he ran cross-country and track.

Tim ran cross-country at Malone College (1974), before transferring to Kent State University. He did not run at Kent State, but was on the school’s first Ultimate Frisbee team. He also has a Master’s in Business Administration from Waynesburg University. Tim got back into running after college, and was a competitive runner into his mid-40s, with best times of 15:01 (5K), 31:45 (10K), and 2:42:39 (Marathon).

Tim has been a USA Track & Field certified coach since 2005. He was a coach at both Panther Creek (2005-06) and Cardinal Gibbons high schools (2007-08), before coaching training programs at The Athlete’s Foot/Capital RunWalk from 2008-2016, where he and Bobby Mack collaborated.

Tim has recently become a grandfather for the first time, he and his wife are thoroughly enjoying this new stage of life!